The Cat's Out of the Bag

I just received a mass email from none other than Texas Senator John Cornyn addressing his thoughts on Obama's latest Supreme Court nominee Merrick Garland.  And to my surprise, it seems Senator Cornyn just let the real reason Republicans in the Senate are giving a new definition to the term, "obstructionist".  Here's a screenshot of what I received: 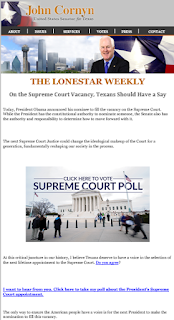 
"The next Supreme Court Justice could change the ideological makeup of the Court for a generation, fundamentally reshaping our society in the process."

That's right folks, this has nothing to do with the, "Biden Rule" or, "Letting the voters have a voice."  They refuse to even hold a hearing because they do not want the current President of the United States the opportunity to fulfill his Constitutional obligation of filling an empty seat on the Supreme Court because they know their ideology, their Christian ideology, will no longer have a stranglehold on the Supreme Court.

Most of his colleagues have been hiding behind the empty rhetoric of a "lame duck" President amid the Presidential PRIMARY season.  But this guy, comfortable in his seat for another four years, told us all the real truth.

Get this, he even included a "poll" in this ridiculous excuse for not performing the duties for which this man was elected.  I'll let you decide if this actually meets the definition of a poll:


"Do you agree that Texans and the American people deserve a say in the selection of the next lifetime appointment to the Supreme Court?
Yes
No"

Nothing says, immature elementary school begging like a loaded yes or no question.

Please forward this to everyone who says they're not going to vote.  Forward it to all the young people that claim they'll stay home unless Bernie Sanders gets the nomination.  These are the type of people that are currently running our Congress, and they will continue to operate this way until we vote them out.