First of all, after my initial research I realized I needed a robust and high quality control unit.  I chose the ISY994i from Universal Devices for it's flexibility, ease of use, and more importantly, their various network programming interfaces (again, more on that later.)  At the time I purchased this unit, it was the only controller offering so many features.  I felt I got more bang for my buck, and I knew it would fit the bill when it came time to write my software.  (Insteon is now offering a new Hub, which looks very promising as well.  However, in my opinion their programmer interface is not nearly as concise as the ISY994i.)

Next, for my outlets and switches I chose Insteon products because they offer both powerline and RF communication between components.  Insteon refers to this as "dual-band", which means that a signal is sent via the electrical wiring within your house, and another signal is sent via radio frequency.  If the signal isn't consumed by the particular device through the wiring, it has another chance to consume the signal via RF.  Plus, most of their components not only receive controller signals, but also possess the ability to re-transmit these signals to other potential components.  Obviously this means that as you buy more components, you build a bigger automation network.  This is very convenient for any houses larger than say, 1,600 square feet.

Insteon also offers an extremely wide array of components like in-wall outlets, switches, sprinkler controllers, thermostats, garage door kits... you name it.  My house is littered with various Insteon components and anytime I find a frequently used lamp or light that would be better served by automating it, it's an easy conversion.  For example, I never really felt like I had complete control over my sprinkler system.  Not to mention the Weathermatic controller had a knack for blowing the tiny little 1 Amp fuses every couple of months.  So, I removed the old flaky sprinkler controller and installed a couple of Insteon low voltage sprinkler controllers.  After a quick bit of wiring and linking to the ISY994i, I was all set with complete control and status of each station in my sprinkler system.

Now let's go back to the ISY994i in order to discuss my software.  Years ago, my software ran as an executable in Windows 7 and utilized a direct network connection to the ISY994i controller.  This worked very well for a while, but it generally only functioned when used within my home network (we techie people call that your 'intranet').  Outside my home network (or what techie people call the 'internet'), my connection reliability to my home was spotty at best and nonexistent at worst.  Thus, as the Windows operating system changed, and computer hardware adopted touchscreens, AND Windows Phone offered an easy port of my code, AND the Universal Devices folks offered a new network programming interface, AND internet connections got faster, (and you get the idea...) I decided a new approach was long overdue.

Without going into all the gory technical and programming details, I recently finalized the latest iteration of my SILAS software.  The results of which have been outstanding, at least for me and my family's uses.  I have given the clunky, overly complicated web interface of the ISY994i an easy to manipulate user interface that fits very well with the smallest of Windows tablets.  Not to mention it serves as a satisfying balance between providing the current state of my home and the convenience of modern touchscreen user interfaces.  SILAS can display active devices; the current weather at a glance (and a more descriptive forecast if you wish); lists of rooms or scenes; and of course, Cortana integration for those that actually like issuing orders to their homes.

Finally, I'd like to add that having all of this automation without some kind of fixed, interactive terminals around your house forces everyone, even visitors, into your particular technological ecosystem.  It is this reason that I recommend at least one easily located, wall-mounted terminal/interface to your home automation.  The good news for me is that finding relatively cheap Windows tablets has been fairly easy since Dell and HP have been practically giving them away for the past year-and-a-half.  These small tablets - 8" to be exact - make the perfect interface for high traffic areas like our kitchen and our loft.  Here's a quick snapshot of SILAS in our kitchen (please note that I have plans to build a custom frame to give the tablet a proper finish to the wall): 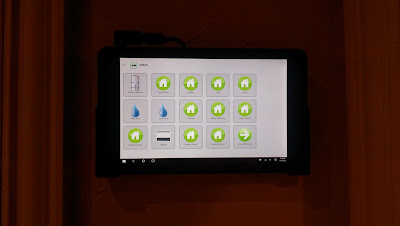 Also, I have found that Microsoft offers extremely cheap unlocked Windows phones (Lumia 635) on Amazon or the Microsoft Store.  As a matter of fact, these phones are so cheap that they are a far more economical choice than Insteon's 4 or 6 button remotes!  All you have to do is set them to airplane mode and then turn on the WiFi.  And just like that, you have yourself a crisp, backlit LCD interface.  Not to mention they look exceedingly dapper running SILAS (if I do say so myself): 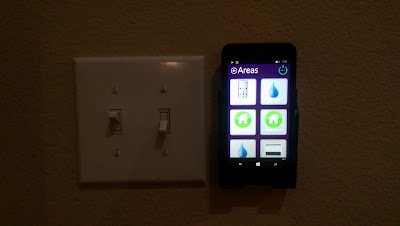 So there we have it.  I hope this helps someone else who might be considering entering the world of home automation.  There are so many products coming to the market now that it is extremely difficult to find the right fit for what you envision for your home.  I hope that in reviewing my home automation solution, it might help give you a bit of direction and clarification as you begin your own adventure toward a fully automated home.
Posted by Larry Mathys at 9:26 PM 0 comments