After seeing several posts and photos of the Sun shining through the clouds on a couple of different social media sites, I had a thought.  Why is it that some very common and very natural phenomenon tend to inspire religious awe? 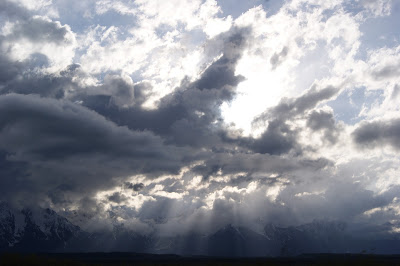 Isn't that breathtaking?  This is a picture of the Grand Teton National Park and was taken by my Mom.

For you personally, what first comes to mind when you see this?  Does it provoke an emotional response or a sense of spirituality?

Here's my take: I love how the sunlight just pours through those broken clouds.  Since I was very young, I've loved this visual effect.  First of all, it's undeniably gorgeous.  But second, it always takes me back to a game I played with myself where I enjoyed visualizing myself floating above the Earth with the Sun behind me, and seeing the shadow on the Earth from space.  Ah, memories...

Now here's the second photo of this experiment: 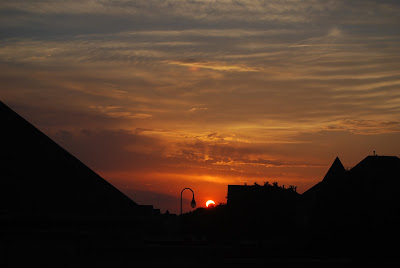 This is a picture of the annular solar eclipse in May, 2012, and was taken by me.

Okay, now what first comes to mind when you see this?  Does it provoke an emotional response or a sense of spirituality?

Is there a difference in perception from one event to the other?  How so?

From my point of view, I think the second picture is far more inspiring than the first.  (And no, it's not because I'm the one that took the picture.)  WOW!  In just one simple photograph, I get to see the relationship between three different celestial bodies and stand in awe of the magnitude of the distances involved just to bring this image to my eye.

I'm betting there are those that have a far different perception of the two images, and my thought is that this is likely due to emotional programming at a very young age.  Most people living on the Earth now are not particularly inspired by eclipses (nor do eclipses provoke a sense of spirituality) because we have been taught that this is simply the Moon sneaking in front of the Sun.  On the other hand, the first image is so frequently used in religious imagery in Christian circles, that many people instantly associate it with faith, God, or Jesus.

So what do you think?  What's your perception of these two photographs?  I'd really appreciate some feedback from both sides on this thought.  Thanks!
Posted by Larry Mathys at 3:15 PM