I decided to try my hand at the, "Scumbag" internet meme with the following two Scumbag Preachers.  Both of these are based on an amalgam of three different preachers that I've had conversations with online.  After hearing their collective views of the newly upheld PPACA law, I thought they would all make perfect internet memes. 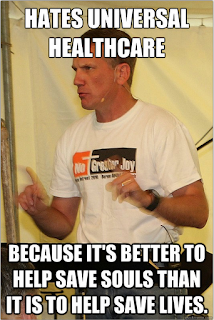 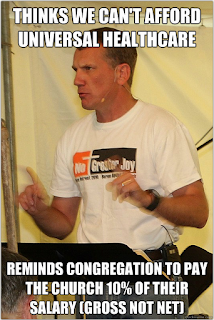 What do you think?
Posted by Larry Mathys at 7:31 PM 2 comments

Now that I'm finally getting the time to make myself vocal again, I decided to start with a couple of standard mental disconnects that I've stumbled across over the past two weeks.  The first is the ardent acknowledgment of the power of prayer and how some religious people can convince themselves that praying to their god moves them to the front of the long line of other humans begging for good fortune.  The second is the idea of a religion whose leadership purports to care deeply for each and every soul, yet at the same time oppose measures taken outside the church that are intended solely for the greater good.

There are many people in my life that swear by the power of prayer.  They ramble on and on how their lives have been drastically affected simply by asking their god to help them through various stressful events and other personal crises.  I was told by one person that I should at least be able to recognize that it provides them with some comfort to know that someone else is praying for them.  I can only assume this person means that these other people doing all this praying for them are in fact praying to their god of choice, else there's no real reason to feel comfort as their friends and or family are begging the wrong deity.  And isn't it funny that their god really doesn't have to do anything beyond making a particular person feel as if they have the strength to survive the event?  I mean, god doesn't seem to pay any attention to amputees, does he?

What these people never see is that prayer is a form of begging.  You're putting yourself in the same position as a panhandler.  Sure, you're supposedly not praying to a stranger, but you have to admit that the two situations are remarkably similar.  Even the most common body position for prayer is that of the common beggar - on your knees, head down, with your hands placed together and in full view.  (You wouldn't want the guy with all the goodies to think you were hiding something, right?)  Some people often embellish the position with a bit of a submissive twist, arms open and raised in the air with their chest completely exposed.  If this isn't the very definition of begging, then someone had better be a damn good debater to convince me otherwise.

Even so, there are people everywhere that will desperately try to convince me of how their god is constantly working in their lives; if I would just look at how much stronger they are today, it would be all the evidence I needed to recognize the power of prayer.  Their families are healthy, happy, and thriving solely because their god chooses to grant their collective prayers.

And yet... just a half a world away, there are men, women, and children begging the same god - not for good report cards, or to heal a child with a fever, or to give them strength to keep going, or for good news from the doctor.  These people are begging god for medicine; they are begging god for food; they are begging god for water.  And these poor, innocent human beings will die... all the while begging that god to answer their prayers.  In the grand scheme of the universe, this is the tiniest, most minuscule of distances, is it not?  So what is this?  Is this just willful ignorance in our society?  Or is this an egotistical aversion; a stubborn unwillingness to recognize the suffering of others on a planet full of almost 7 billion other people?  If it is, I'm not really sure god has made these people as strong as they believe themselves to be.

Along this same train of thought is the idea that on one hand, a church's leadership can claim that each and every soul in their community is worth saving.  Yet on the other hand, these same people can openly oppose universal health care.  How can this be?  In my mind, I can find nothing worse than a person who stand upon a pulpit each and every Sunday, convincing other believers of the importance of saving other people's souls, then that same person makes an abrupt about face when it comes to making sure that these people should have access to the medical care that they might require.

For example, I'll provide an example to put this kind of thinking in context.  "The idea behind it - universal health care - sounds good.  But how are we going to be able to afford it?" he asks.  Now, make absolutely sure you understand what it is he left out of that statement.  What he left out was the word, "sick."  That's the troublesome word, isn't it?  Sick.  Whether it was done deliberately or accidentally, what he really meant by his question was this: How are we healthy people going to be able to afford other sick people?  As a religious leader, how can we afford NOT to help sick people?  Tell me, is it better to let them go on in agony, or let them die simply because we're all too greedy to help those in need?  Does a belief in the afterlife somehow make this kind of reasoning easier?

I cannot imagine thoughtlessly turning my head to those who are sick, those who are bearing the burden of a dying loved one, or to those that are busy going bankrupt simply because their bodies decided to create cell with unimaginable growth rates.  Until I'm convince otherwise, I think the only way a person can reach the point where they can turn a blind eye to those in need is to believe in an all powerful, all knowing, perfectly merciful god.