About a month ago, the Dallas/Ft. Worth Coalition of Reason began their campaign called, "Our Families Are Great Without Religion."  The DFWCoR purchased several billboards as well as some pre-show advertising time and space on the movie screens at the Green Oaks Movie Tavern in Arlington.  The Movie Tavern summarily rejected the advertisements after early publicity of the campaign suggested that the DFWCoR was targeting kids (thank you, Fox News affiliates.)

Then, luckily, the DFWCoR thought they received some good news because a couple of days later another theater - the Angelika Film Center in Plano - agreed to enter into a contract with the them to continue their campaign on a local movie theater screen.  I remember feeling so proud of and so grateful to the Angelika, because a local group of atheists had finally found a business partner willing to accept them - right here in Plano.

After the local Christian complaint machine inundated their office with nasty phone calls and emails, the Angelika decided that given the intolerant environment, the contract with the DFWCoR was cancelled.  The manager claimed that the decision to cancel the contract was made at the corporate level and they had nothing to do with it, as if that washes their hands of any wrongdoing.

It is worth noting that the Angelika Film Center has run many, many different advertisements from local churches and religious groups.  But the atheists were just too contentious...

If you'd like an idea of what the DFWCoR was running, here's an example of one of the advertisements that's been pulled TWICE: 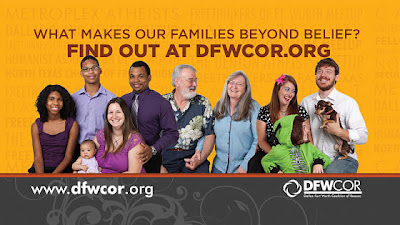 The image is SO controversial, I know.  I mean, think of the children!

Well today, I found out via Facebook that the DFWCoR is getting some help - some legal help.  The American Humanist Association has warned the Angelika Film Center with a fantastic notification that it has violated federal law by refusing to run the advertisements according to the contract.  Take a minute to read the two-page letter - it's filled with little gems like this:

"This pattern of facts clearly indicates that the Theater refused to do business with the Coalition because of bias against its religious views."


"Title II of  the  federal  Civil Rights Act of 1964 (the “Act”) prohibits a business establishment such as the  Theater from discriminating on the basis of religious views (such as atheism)."


"Please note that under the Act it is irrelevant whether your decision to refuse to do business with the Coalition was based on personal or organization animus to the atheist views of the Coalition and its proposed advertising or whether it was purely a business decision intended to avoid controversy."

Am I the only one that hopes the AHA comes to the DFW metroplex to kick some ass?  Legally speaking, of course...
Posted by Larry Mathys at 8:58 PM