It seems that the officials in Athens, Texas are not the only ones who don't understand the proper use of government land.  The Van Zandt County Courthouse in Canton, Texas has very similar religious displays to those described in the Dallas Morning News.  (Thanks to user podiumman2002 of the Metroplex Atheist discussion group for the pics.) 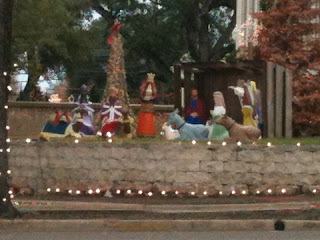 Here we are again, the same bogus nativity scene with milky white European figures on display.  They can't even get the ethnicity of the characters correct.  And picture two: 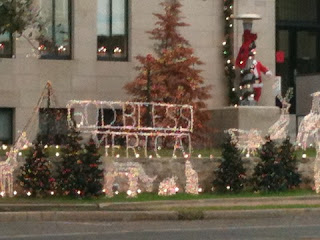 Granted, the officials of Van Zandt County might just be able get away with this second display, since they might be able to convince a judge that "God" is inclusive of other faiths.  The first one?  Absolutely not.

As one other user of the discussion group suggested, it might be a hoot if someone were to knock out that "B" in the lights.  Not that we're condoning vandalizing a display...
Posted by Larry Mathys at 8:17 AM